In his acceptance speech during the 2019 Golden Globes Awards, Bong Joon-ho said:

“Once you overcome the 1-inch-tall barrier of subtitles, you will be introduced to so many more amazing films,”

That line was a perfectly formed dagger that was slid between the ribs of certain moviegoers and critics. I was certain that someone would cop the title for exactly the purpose of this blog.

“I think we use just one language — the cinema.”

Now, I do have a bias. But it isn’t against foreign language films or world cinema. My bias is that I’m far more likely to watch genre films (action, horror, crime, thriller, etc). So that filter may influence my posts here. Right now I am watching a lot of Asian cinema (Hong Kong, Korean, Chinese) and recently started diving into Indian cinema. But I am an omnivore viewer and will try just about anything.

Bottom line is that I love movies. This blog will be a humble attempt to elevate and celebrate some of the world of subtitled films. I will share reviews, poster art, links of interest to other sites, trailers, and whatever else is appropriate.

I hope you find something at this blog helpful.

Please note: This is a pro Wakaliwood site, any anti-Wakaliwood sentiments will not be accepted.

Yakuza Wolf stars Sony Chiba in his swaggering 70s menacing prime. There are a ton of spaghetti western flourishes scattered throughout. It’s basically a Yakuza flick as a Spaghetti Western. Yakuza Wolf is a great piece of 70s Japanese exploitation cinema and worth checking out.

In his book Gun and Sword: An Encyclopedia of Japanese Gangster Films 1955-1980, Chris D partly wrote:

“There is a completely gonzo yet effective melange of spaghetti western and surreal comic book imagery…One of Chiba’s most enjoyable films.” 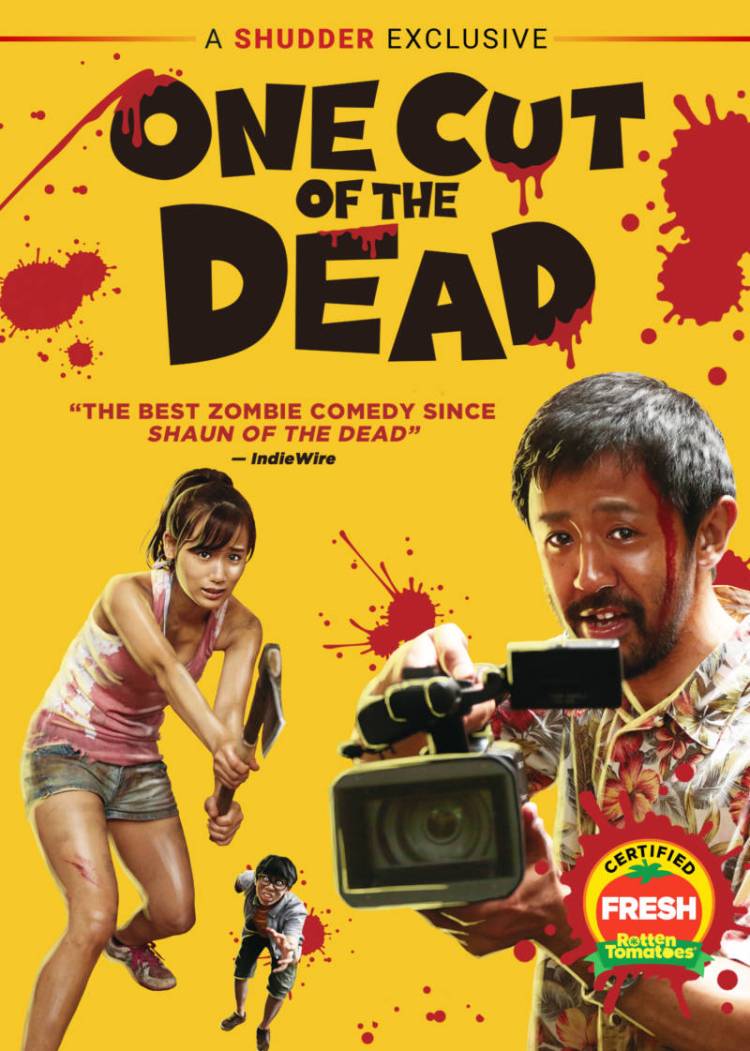 Can a movie review consist simply of three words: Go see it.

Fine. You want more. But be aware that One Cut of the Dead is a tough movie to talk about. It’s actually a movie where it’s easier to talk about what it isn’t.

Sometimes reviewers don’t want to say too much about a story for plot reasons. Because there’s a thrill to be had in the ride of the moment. Reveals to be had and secrets to be told. That’s partly the case here.

What we can talk about is the structure. It’s a movie that very clearly has three parts. The first part is the one that is easiest to talk about. On the set of a low budget zombie movie, a zombie outbreak occurs. The entire first part is about thirty minutes long and is all filmed in a single take.

Let’s talk broadly about some of the things One Cut of the Dead is. It is an ode to filmmaking, creatives, and the Herculean team effort and support system of friends and family that makes it all possible. Because despite the established presence of auteur theory that has cast a long shadow over filmmaking, making movies, especially low budget horror movies, has always been a team sport (just ask George Romero).

It’s also a puzzle. Everything that is happening does so for a reason. Things are being set-up to be paid off down the line. If it feels cheap and hokey, it is supposed to. If something feels off but you can’t quite put your finger on it, it is supposed to. The final moments are an act of triumph. You will have already recognized the shape of the puzzle and the present struggle to make the pieces fit. And when the final piece of the puzzle is locked into place, you too will shout POM!

Finally, after you’ve had a chance to see the movie, please take a look at Joe Bob Briggs’ inspirational take on the film. By the end you’ll be ready to go make a movie.

Earlier this year, a friend posted a message to Facebook that he was so glad to see the second season of Kingdom drop and that he hoped more people would watch it. For me it served as a good reminder. I had heard of Kingdom but, as so often happens, got distracted by drinking from the fire hose of streaming choices and new releases. Don’t make the same mistake I did. If you haven’t heard of Kingdom hopefully this will serve as notice, if you have heard of it but haven’t made the time yet please do so. Kingdom is a great show that is worth your time.

Kingdom is a South Korean, historical, action-horror, zombie show (say what!). It’s set in the early 1600s. There is a strict social class system in place and there is constant intrigue as people scheme to improve their station in live and/or move closer to the center of power. Savvy characters need to be constantly aware they they are playing a game, one that can have devastating consequences. At the start of the show the King has fallen ill, those in power closest to him are closing ranks, and word spreads of a possible political conspiracy. Within this fraught environment, there come word that a plague has broken out in the southern province that may be bringing the dead back to life.

Here’s the thing about Kingdom, it rips by at blistering pace. It quickly build momentum and rarely lets off that pace. Even at such a fast pace, clarity is never forsaken. The characters are all clearly drawn and their action and motivations are always in sync. There is attention to period detail that greatly helps the viewer. For example, the different groups and social classes all have distinct styles of dress, specifically their hats, that always make it clear to the viewer what member of what group is doing what and who we need to be rooting for.

I made a stray comment to my wife that I think is worth sharing. Kingdom has some broad stroke similarities to Game of Thrones (zombies, political intrigue, strong female characters, power struggles, historical time periods) but never resorts to rape as a plot point or means of “character development”. The female characters are powerful, are placed in dangerous situations, fight bravely, are smart and the writers never saw a need to have any of them assaulted. Defeated in some cases yes, but not assaulted.

Kingdom also has political undertones that parallel events happening in the world today. Specifically with regards to how those in power are willing to keep that power at any cost once they have it and how those machinations are often on the backs and at the expense of the regular citizens.

Kingdom is a great show to binge, there’s only 12 episodes. It will appeal to fans of fantasy, horror, Korean TV/film, and action/adventure stories. It remains to be seen whether there will be a season 3. It should be noted that all of the major plot lines are wrapped up by the second season but it does end on a cliffhanger that introduces new information and new characters and hints at what a future direction for the show could be.

Maqbool is one of those movies that has an instantly hooking plot blurb. Many will hear it, decide they don’t to hear anything further, and go watch the movie.

Here it is: Maqbool is a retelling of MacBeth set in the Mumbai criminal underworld.

For those who just ran to Just Watch to see where it is streaming, come back when you are done and tell me what you think!

This is such a great movie. The gangster story filtered through the prism framework of MacBeth works so well here. The weird sisters as a pair of corrupt cops are brilliant and threaten to steal the movie at every turn.

As the titular character Irrfan Khan turns in one of his greatest performances. His smoldering intensity really shines in the back half of the story where he believes he is going mad because of what he has done as the grief and guilt catch up with him and his lover.

Maqbool is streaming on Prime

This is a dark film that sneaks up on you. I’m so glad that I started exploring more Indian cinema, it’s been a very fruitful journey so far. So many gems and interesting movies that don’t really get talked about as much as thry should.

Ozhivudivasathe Kali is filled with long take static shots. Initially, there are a lot of nature shots. I think we are supposed to read into them that nature is a wild place where anything can happen. Certain cliched phrases come to mind during some of the shots like “still waters run deep” or “what’s lurking below the surface”.

For whole sections of the film you could be forgiven for thinking you were watching a nature series. But there is a quietly growing sense of urgency, that not everything is as it seems and that something isn’t right. The weather almost acts as a Greek chorus throughout the film. Calm water lulling you in, then a storm is approaching, the storm is here, the storm passes leaving a path of destruction.

Nature is only a part of it though. On election day, a small group of men gather at a secluded location for a weekend of fun and games, of bullshitting and relaxing. As the movie progresses, layers are peeled back and tensions begin to rise. Conflicts and alliances that are an extension of society come to the surface. This all culminates in an act of violence.

The entire third act is done in a single shot. Sometimes the camera roams the setting like a ghost bearing witness to the escalating tensions.

The comparative conclusion I’ve come to, which won’t mean much to many, is that Ozhivudivasathe Kali is like a distant, Malayalam cousin to Charles Willeford’s The Shark Infested Custard.

Give this a chance and you’ll be rewarded with a rich, dark story.

I recently watched Monologue and Black Bear in pretty close proximity to each other and there are some similarities in them that would make for a good double feature.

Monologue is an experimental film from 1987. Our unreliable narrator/protagonist tells us about his life and how he grows up. At first the story is presented one way, with events playing out favorably for him. Part way through the movie we get another version of these same events where things play out far differently. By the end of the movie, these versions are blending together so the viewer isn’t sure which of the two sets of events, if any of them, are real.

Anantaram, also known as Monologue, is a haunting exploration of memory that leaves you replaying the fine details of the story. Trying to assemble the bits and pieces to see if they fit together and how they fit together.

This is a great movie and well worth tracking down.

The Burial of Kojo is a 2018 film from Ghana in Twi and English.

A gorgeous looking movie where every scene is framed in an unexpected manner that enhances the beauty. It’s just wonderful to look at. The story is a whisper that skips along only touching the lush visuals as and when necessary. There are hints of magic and myth at play which become clear in the final moments as the hidden framework of the movie reveals itself.